Ah, 2002, the good ol’ days! The Lord of the Rings movies were at their peak, Kelly Clarkson won American Idol, and Brittany finally ditched K-Fed. It was at this time, too, that blogging was really at its height, sending us full steam into the information age. A blog of particular note, Julie & Julia, tracked 1 woman’s challenge: 365 days, 524 recipes, 1 tiny apartment kitchen – the recipes, of course, from Julia Child’s The Art of French Cooking. Inspired by Julie Powell, seeking refuge from the monotony of her 9 to 5, this week we’ll take a closer look at all the Julidochromis species we have in our tanks. Wait, don’t go…there are only 5 to chronicle!

Endemic to Lake Tanganyika, there are currently 6 described species of Julidochromis, or “Julies”, with many regional variants of unknown status. They all live in rocky zones near the shore, where they pair bond and cave spawn. Julies should be kept in tanks with soft substrate, lots of scattered rock piles, and hard, alkaline water. They are best maintained as a single pair and can be kept alongside other Tanganyikans like Altolamprologus and Cyprichromis, though never with other Julies due to their territorial natures and potential for hybridization. If tanks are suitably large and particularly long with many defined rocky habitats, they may be kept in larger conspecific groups with a female bias. Reaching a maximum of 6 inches, they have remained popular in the cichlid keeping hobby due to their small size and striking colors and patterns. Most exhibit yellow and tan bodies with black striping, both vertically and horizontally, with some additional color variations between types. Omnivorous by nature, they mostly consume small invertebrates, and should be fed regular live and frozen meals, high-quality cichlid flake and pellets, and some additional supplementation of vegetal foods like spirulina. Waters are best maintained with temperatures between 73 and 81°F, a pH between 7.5 and 9, and a hardness around 178 to 445 ppm. Hailing from the southwest region of Lake Tanganyika, Julidochromis dickfeldi is more commonly known as the “Brown Julie”. Reaching about 3 inches in length, they look as though a sepia filter has been turned on, with copper eyes, brown bodies, and fins and stripes edged in ice blue. They are shaped somewhat differently than other Julies – their pointed snout and protuberant lips drawing immediate attention to their faces. Found along the Tanganyikan northern shorelines of the Democratic Republic of the Congo, Julidochromis transcriptus “Bemba” swims to the beat of its own drum with regards to patterning. Known as the “Masked Julie”, this cichlid reaches 2.5 inches and has beautiful black patterning on its face and around its eyes. Rather than dark horizontal striping, they have thick black vertical bands connected by a horizontal stripe along the top. With golden fins edged in blue, these Julies are vying for “best dressed” at Julidochromis High.

Julidochromis marlieri is among the larger species in the genus, reaching 6 inches in length. These “Marlier’s Julies” are bright white with black checkerboard patterns along their sides, yellow pectoral fins and eyes, and blue-lined fins. They are widespread throughout the northern and southern edges of the lake. These charismatic cichlids are performers by nature, swimming along rocks at odd angles like acrobats! 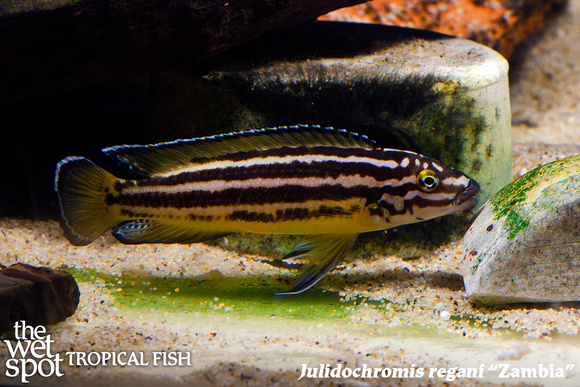 Another 6-incher, Julidochromis regani “Zambia” is the bravest of the genus, found often searching for morsels in sandy regions of the lake further from the shoreline. They are still rock-dwellers and cave spawners and should have plenty of rocky furnishings in their tanks, though a little extra sandy expanse is appreciated. These “Regan’s Julies” are the poster children for the genus, sporting yellow pectoral fins and belly coloration and strong, black, horizontal striping and face patterns.

Going back to the smaller side, Julidochromis ornatus is the most ethereal looking Julie in the bunch. Known more commonly as “Gold Julies”, they reach 3 inches and have a dramatic golden sheen to their undersides, soft pink background coloration, dark horizontal stripes, and blue-tipped fins. Mainly found in the northern part of the lake, several geographic morphs of this species exist and sometimes circulate through the hobby as albinos, “Yellow Julies”, and “Ornate Julies”.

In modern society it is easy to get caught up in day to day life, and in jobs that aren’t entirely fulfilling. We’re lucky to have made our passion our trade, but know that for many, this is a hobby, a safe space where you can experiment, set goals, and feel satisfied with your accomplishments. For that, we hope you take a page out of Julie Powell’s blog, and make it your own!